West Midlands leaders have met with the National Infrastructure Commission (NIC) to outline the region’s bold plans for transport, housing and economic development.

They looked at how recommendations in the UK’s first-ever National Infrastructure Assessment could, if implemented, help the region to achieve them.

The National Infrastructure Commission was set up by Government to advise on the nation’s infrastructure needs and is visiting city regions to discuss the proposals they have made. 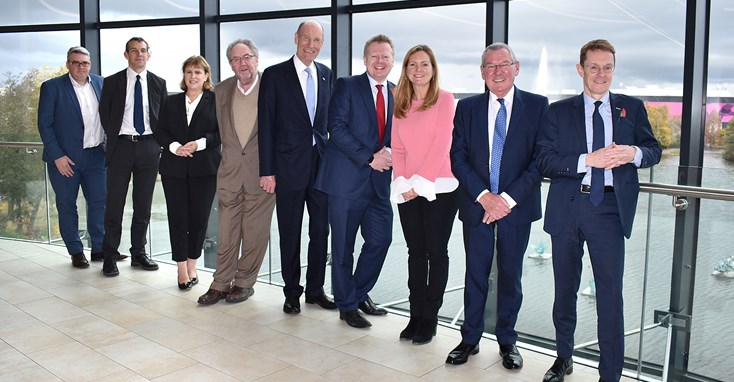 Mayor of the West Midlands Andy Street, along with council, business and university leaders, met with the NIC delegation, led by chair Sir John Armitt at the Resorts World complex at the National Exhibition Centre.

The leaders discussed how best to meet the infrastructure needs in transport, energy provision and digital communications among others.

Sir John and his team also visited the UK Central development site near to the NEC and the Wolverhampton to Walsall growth corridor.

The NIC recommends that cities should receive £43billion of additional funding up to 2040, and additional powers, so city leaders including Metro Mayors can develop long-term transport strategies that also deliver job opportunities and much-needed new homes.

Their visit came on the day that the Mayor joined with Mayor of Greater Manchester Andy Burnham in a call on Government to fully adopt the NIC’s recommendations.

The mayor said: “It was fantastic to meet Sir John and his NIC colleagues and show them some of the great work we are doing to deliver a revolution in transport, housing and employment.

“The NIC has offered us, and Government, a clear blueprint to achieve our ambitions, in terms of funding and powers needed to transform our cities.”

Sir John said:  “I am as impressed as ever by the enthusiasm and innovation taking place across the West Midlands to improve the region’s infrastructure for the benefit of residents and businesses alike.

“I was pleased to hear from Andy Street, Cllr Ward, Cllr Lawrence and Cllr Sleigh – as well as local business and university leaders – on their latest plans.

“I am also pleased that both Andy Street here in the West Midlands, and Andy Burnham in Greater Manchester, so clearly recognise the real opportunities that the recommendations in our National Infrastructure Assessment represent, and are making the case to Ministers.”