Transport Secretary Chris Grayling has confirmed the government will consider plans calling for the re-opening of three Birmingham stations that have not served passengers since the Second World War.

On a visit to Moseley today (Thursday 8 March) the Transport Secretary said the Department for Transport would study the proposals for services through Moseley, Hazelwell and Kings Heath stations, on the Camp Hill line, which have been put forward by West Midlands Combined Authority (WMCA) and Transport for West Midlands (TfWM).

The line, which connects Kings Norton to the West Coast Main Line east of Birmingham’s New Street station, is currently used by some Cross Country services, but is mostly used by freight trains. 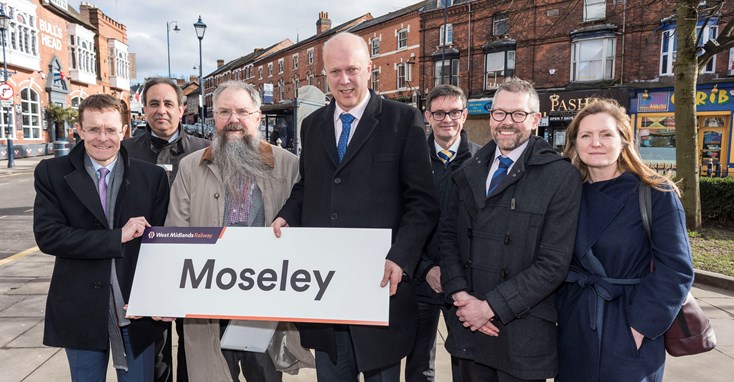 The three stations were last open to passengers during the Second World War.

Mr Grayling said: “We are investing in the biggest modernisation programme of our railways since Victorian times and I know that bringing passenger services back to this line has been an aspiration of local groups for many years.

“With the right support and success in securing of local funding, this could very well become a reality and I look forward to studying the plans carefully.”

The stations were included in the West Midlands and Chiltern Route Study, which was published in autumn last year.

Franchise operator West Midlands Trains are currently working on a business case for the stations, which is due to be completed by this summer. With further infrastructure investment and local funding identified, the stations could potentially be delivered by 2020. If given the go-ahead, passenger services would share the line with existing freight services.

West Midlands Mayor Andy Street has also pledged to reopen the stations. He said: “The demand for rail travel now is at its highest since the 1920s and opening up the Camp Hill line is something which would greatly improve services into Birmingham.

“It would be even better if we were able to do so in time for the Commonwealth Games in 2022, when the eyes of the world will be on Birmingham and the West Midlands.

“I am delighted that the government is now studying our proposals.”

Earlier Mr Grayling had visited the site of a proposed new railway station for Willenhall, near Walsall, before moving on to the Midland Metro depot at Wednesbury.

There he saw testing of the UK’s first battery operated tram, which is scheduled to enter service in the next few weeks.

The tram will be able to operate over short distances with the need for overhead power lines.

This will preserve architecturally sensitive areas such as Victoria Square in Birmingham through which an extension from New Street station to Centenary Square and Edgbaston is currently being built.