The new Sprint bus route will run an express zero-emission service along the A34 and A45 between Walsall and Birmingham Airport and Solihull to Walsall via the city centre it has been confirmed.

The West Midlands Combined Authority (WMCA) Board will next week be asked to approve the £88 million funding and delivery schedule for Sprint, which will offer commuters and Birmingham 2022 visitors reliable services to key venues including Alexander Stadium in Perry Barr, Arena Birmingham and the Resorts World Arena. 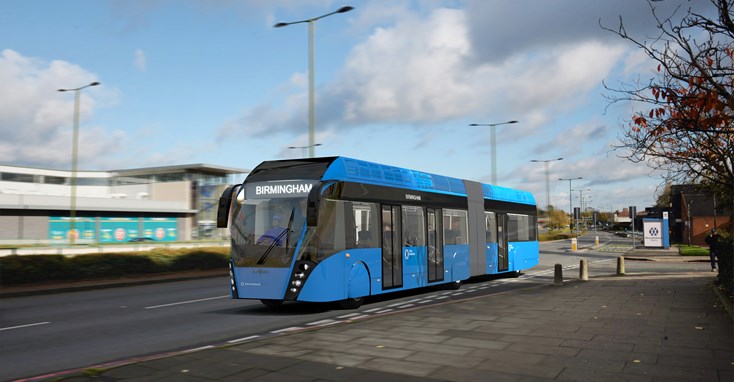 Indicative design for Sprint on the A45

Commuters will also benefit from the introduction of priority signalling, extended bus lanes and a swift boarding experience to improve journey times and reliability across the route.

Taking into account customer feedback from a prototype test, improved bus shelters along the route will include CCTV to support passenger safety, comfortable seating and real-time journey information. Changes in stop layouts and off-board ticketing will also speed up the boarding process reducing time spent at each stop compared to conventional buses.

TfWM’s aim is to build confidence in public transport and make it a viable option for travel, eventually reducing congestion on the region’s roads. Existing bus routes will also utilise new priority signals meaning over 30 million trips are expected to benefit from the changes.

The proposed operator, to be announced in due course, has indicated they will cover the full cost of the vehicles. Expert analysis has also revealed a return on investment to the Birmingham economy of at least £2.40 for every £1 spent on developing Sprint.

Mayor of the West Midlands Andy Street said: “The first phase of the Sprint scheme will see the introduction of a brand-new, cross-city service running in time to ferry thousands of visitors around the region for the Commonwealth Games.

“The scheme is also a key part of our transport revolution which is, after decades of under investment, delivering new bus, rail, Metro and cycle schemes to serve the people of the West Midlands for generations to come.

“Pending approval of the business case at the WMCA board next week, we will be able to get on with delivering yet another transport scheme the West Midlands can be proud of.”

Cllr Ian Ward, WMCA portfolio holder for transport and leader of Birmingham City Council, said: “The eyes of the world will be on Birmingham and the West Midlands during 2022 so I am delighted that we will have this efficient new Sprint bus service to move people around and showcase the best our region has to offer.

“Sprint is also part of our wider plans to transform the way we travel. Through enhancing bus shelters and providing priority for Sprint and other existing services, we are offering people a reliable and sustainable alternative to car when travelling around Birmingham. It’s all part of our commitment to tackling road congestion and climate change.”

Additional work on the route will take place following the Commonwealth Games to further enhance the service.

The full business case will be presented to the WMCA Board on 14th February.